During the last 4 weeks of October this year we are leaning into a time to reflect of what it means to be a part of Trinity; a progressive, inclusive, creative community of faith. One of the responses of that time of reflection will be to respond to the call to make a financial pledge for 2023.

Each week we will hear from our Co-chairs, Trinity members Jeffrey Albright and Kim Buehler as well as take in Impact stories from the membership articulating why Trinity is a place they have chosen to invest in through time and commitment and financial support.

Additionally, in this space we will share different perspectives on this year’s theme, “More than Enough” offered by voices from around the country in our denomination through the work of the Episcopal Network for Stewardship (tens.org).

May this time be rich and generative as together we say yes to the invitation to give generously in response to all the blessings we receive.

May you never forget that you are loved, 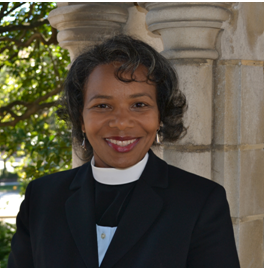 By The Rev. Glenna Huber,

Rector of Church of the Epiphany in the District of Columbia, a congregation with a long-standing primary ministry with those experiencing homelessness.

I attended Seminary in New York City. It was an amazing experience being out in the fast-paced city. Even though I was from a location that tended to greet, or at least acknowledge, passerby’s I had quickly adapted to the head downfast walking culture that was dominant in Manhattan. I had also gotten accustomed to ignoring the people lacking permanent shelter along every New York Street. I had perfected the art of responding to people yet not really listening to what those on the streets were asking from me. Really, I had ceased to notice the face of God in the people around me.

One day while moving quickly through a crosswalk a man started talking to me. I responded that I didn’t have any money and kept moving. He shouted at me, that he wasn’t even going to ask for money. I stopped embarrassed and turned to listen closely to what he was saying. He just wanted to offer a compliment as he had seen me a few times around the block.  I never would have compared myself to the unjust judge, yet there I was prejudging without even taking the timeto listen.

Frequently, when thinking about those who are experiencing homelessness, we understand generosity to be the sharing of a few coins, or dollars received when leaving a store. Sometimes we may leave food, tents, some clothes, and while all those things are important and useful how often are we generously listening? Do we just assume that what thoseexperiencing homelessness most want from us is money? Not to imply that tangible resources are not necessary but to recognize that listening to people is an act of generosity. To give of one’s time, to respect the reflection of the face of God is an act of generosity, an act of justice.